In 2007, SCORE International, a Chattanooga-based sports and evangelism ministry operating in the Dominican Republic for 30+ years, began to search for ways to minister to orphaned boys, often found homeless and destitute. At the same time, Pastor Steve Berger (Founding Pastor of Grace Chapel, Franklin, TN) was invited by a friend and SCORE Board Member, Reese Smith, to spend a few days in the DR participating in SCORE’s baseball ministry. The mornings were spent in baseball camps and ministry, while orphanages were visited in the afternoons.

Orphanages were established more often for girls only, and when Pastor Steve and Reese visited an orphanage where boys and girls had been housed together the previous years, they saw only girls.  Reese then asked the question, “Where are the boys?”  This led to the discovery of very poor living conditions for the boys who had been separated and moved to another location.

Several Grace Chapel members were in the group who saw these boys, including Sarah Berger, as well as SCORE officials, and an immediate decision was made to join hands and prayerfully commit to making a long-term commitment to provide a loving home environment where young boys could grow up knowing the love of God, receive an education, and become leaders of the future for their families and their country.

SCORE had property in the Villa Espana section of San Pedro de Marcoris which they offered for this project.  The drawings for the homes were designed, but there was no name for this complex.  During this time, the sudden and unexpected accident that took our very much loved Josiah Berger to Heaven on August 14, 2009,  changed everything.  The Lord, our Comforter, whispered gently to us, “Josiah’s House.”  The loving and gracious response of the entire Berger family was “YES!”

With hearts full of gratitude for God’s provisions and appointments, we now see the fruit of the many prayers and love of those who followed God’s call to care for the orphans. 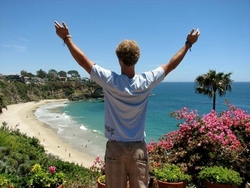 Josiah’s House is the extended heartbeat of Grace Chapel in Franklin, Tennessee, and is named in honor of Josiah Berger, the son of Grace Chapel’s Founding Pastor, Steve Berger, and his wife, Sarah. Josiah unexpectedly went to Heaven in 2009 at the age of 19 and is now more alive than ever! Josiah’s love for missions and his enthusiasm for life continue to inspire those desiring to pour hope into the lives of these amazing boys.